APIs (Application Programming Interfaces) are central to the way software runs today, and represent a growth opportunity for enterprises. They allow businesses to build applications and scale faster. They are also driving strategic integrations of third-party services for shared revenues and growth.

Many companies adopt an API-First approach to accelerate development and enhance collaboration between domains. Documenting APIs becomes essential to make sure that everyone across large IT organizations understands transactions structure and semantics. That’s the true added-value of documenting API specifications with Swagger or OpenAPI.

The OpenAPI Specification (OAS), previously known as Swagger, provides a common framework, a set of rules, to let people and computers discover and understand the capabilities and characteristics of a service. The OAS is to REST what WSDL was to SOAP. The OpenAPI Initiative hosts the community-driven specification on GitHub. The OAS specification is a language-agnostic programming tool to help developers design, build, describe, and consume RESTful webservices without having to look at the source code, extra documentation or having to inspect network traffic. The resulting file, in JSON or YAML, can be used to generate code, produce documentation, and create simulations of the services described.

Swagger 2 was originally introduced by SmartBear Software who later donated it to the Open API Initiative which now maintains this world standard API definition language. Compared to Swagger 2.0, the OpenAPI specification 3.0 is more modular, with a reusable approach to defining the API. It is more powerful when it comes to describing the request response models and underlying security information. Building an API is hard. It is important to design the API's interface and to detail the exact requests and responses of API endpoints, even before you start building the API's business logic, or before you start any development. API design is in fact the process of modeling the contract between the client and the server. It defines the interactions between the application and the rest of the organization, or the outside world.

A definition-driven approach brings many benefits that directly relate to a schema consumption-centric approach to API development. Designers can now focus on the API consumer's needs. The approach reduces dependencies between different teams working on the APIs, such as front-end and back-end teams, architects, tech writers and QA, so as to let them perform their functions at a much faster and efficient rate.

An API’s design is a solid blueprint upon which to build your API and it gives a comprehensive overview on all the endpoints and CRUD operations associated with each of them. It is important to treat API as a contract, pay adequate attention to details, and produce comprehensive documentation. It may be useful to start by developing API standards based on domain-driven design and first focusing efforts on APIs that expose functionality between teams.

Designing APIs starts with an exercise in determination of business requirements. It is critical to involve the business, product owners, engineers and subject matter experts in this effort. The resulting documentation should be agreed upon by all parties and published for everyone before writing a single line of code.

The benefit of having API documentation available before development is that inputs and outputs are clearly defined. The person responsible for creating stories or tasks for development efforts can reference the documentation to help explain the requirements.

The use of a standard specification like the OpenAPI Specification (OAS) makes this process easier and enhance adoption throughout your organization. The team can implement logic, update functionality and optimize processes, and as long as it abides by the input and output defined by the API contract, it can be confident that changes won’t affect other teams in the organization.

Versioning helps manage changes and evolution better and allows teams time to transition to the new API before the old version is deprecated.

Even if an OpenAPI specification is a simple text file which can be edited with any text editor, it’s better to use a specialized one. Swagger Editor is a free online tool to produce an OpenAPI file in JSON or YAML and see a rendering of the written specification. But even with snippets to assist in the creation of the file, the creation of the file still requires intimate knowledge and experience of the OpenAPI syntax and structure.

But writing Swagger documentation with the Swagger UI editor or SwaggerHub platform can be tedious at best, generally error-prone and frustrating... Hackolade takes a visual schema-centric approach so you can focus on the content of requests and responses with its swagger editor. The application also assists with all the metadata to produce validated Swagger files and test the transactions. You can also reverse-engineer existing Swagger files in JSON or YAML to produce a graphical representation of your APIs thanks to the Hackolade swagger editor. Hackolade was specially adapted to support the API design of Swagger, including all the necessary metadata for the API, requests and responses. The application closely follows the terminology of the specification. The visual tool puts the focus on what really matters in an API: the schema of the information being exchanged between systems. At the same time, it provides assistance to modelers and does not require perfect mastery of the Swagger syntax. It generates validated files that are syntactically correct and compatible with the specification thereby greatly improving productivity and quality.

The reverse-engineering function lets the user take a Swagger file in JSON or YAML format and generate a Hackolade model. Then, a designer may enrich the model with comments, generate standard Hackolade documentation, and make the API evolve to generate a new Swagger file through forward-engineering.

How to go about planning and implementing an API-first approach? Standardization is the top API technology challenge API teams want to see solved in the coming years. Here are just a few things to consider as part of an API-first plan.

Hackolade has pioneered the field of data modeling for NoSQL databases and REST APIs, introducing a graphical software to perform the schema design of hierarchical and graph structures. 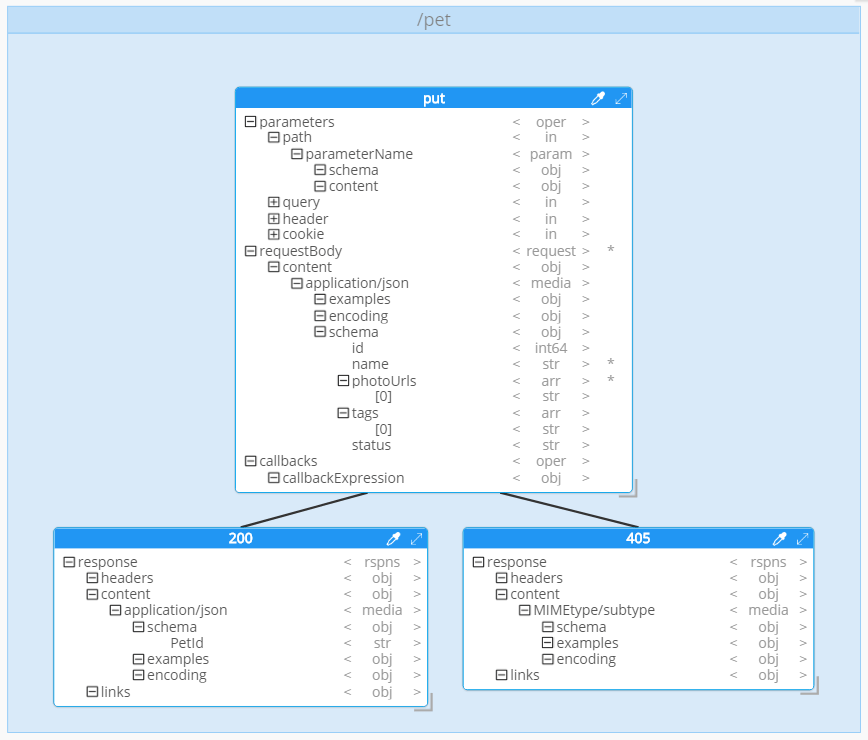 Hackolade is a Swagger API visual editor that dynamically forward-engineers Swagger and OpenAPI specification files as the user visually designs the API. It can also reverse-engineer existing swagger 2 and OpenAPI 3 files so a data modeler or information architect can enrich the design with descriptions, metadata, and constraints.

Hackolade persists the state of the API specification and generates the Swagger or OpenAPI documentation files. It serves as a platform for a productive dialog between analysts, designers, architects, and developers. The visual API design tool supports several use cases to help enterprises manage their APIs.

Components of an API

When your organization begins with API documentation, teams start interacting with each other sooner in the development process. The API document becomes a contract between your application and those who use it.

Internal development can take place behind the API contract without interfering with the efforts of those who use it. Teams that plan on consuming your application can use the API specifications to understand how to interact with your application, even before development begins. They can also use the document to create virtual services with which to test their application.

An OpenAPI document generally contains the following sections or objects:

Additional objects can be added as needed, including security, servers, tags, etc..

Complex types are easily represented in nested structures. This can be supplemented with detailed descriptions and a log of team comments gathered as the model adapts over time for the API schema evolution. 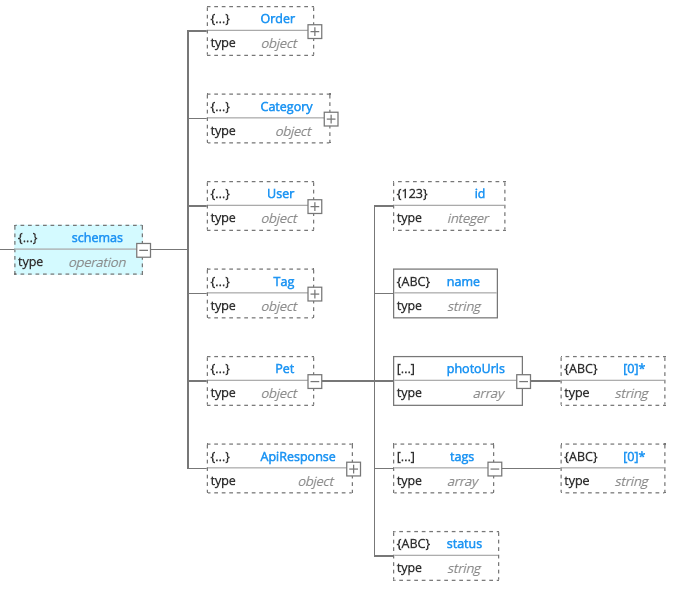 Graphic view of the API in an Entity Relationship Diagram (ERD)

Hackolade lets users visualize a schema-centric API definition via an Entity-Relationship Diagram of the API resources, requests, and responses. In addition to the dynamic API definition creation which facilitates development, Hackolade integrates the familiar Swagger interactive UI documentation where you can test endpoints and transactions. It also includes a comprehensive human-readable HTML report. Many additional features have been developed to help data modelers for OAS and Swagger design. The definition-driven approach brings with it some great benefits that directly relate to a consumer-centric approach to API development: better developer experience, reduced inter-dependencies, higher speed to market, lower risk of failure. Teams can focus on the API consumer’s needs, maintain the contract between the API's intended service and its functionality, and release APIs at a much faster rate.

A model-first approach advocates to design the contract between producers and consumers prior to writing any application code: it is effective, it helps consumers understand data structures quickly, and it reduces the time to integrate. A consistent design decreases the learning curve and promotes higher reuse and understanding of complex data-centric enterprises. Hackolade increases data agility by making data structures transparent and facilitating its evolution. The benefits of API design for Swagger and OpenAPI are widespread and measurable.

To experience the first visual Swagger editor, a powerful Swagger API design tool and try Hackolade free for 14 days, download the latest version of Hackolade and install it on your desktop. There's no risk, no obligation, and no credit card required! The software runs on Windows, Mac, and Linux, plus it supports several leading NoSQL databases.