The challenge in MongoDB data modeling is to balance such flexibility with the needs of an application to access data with predictable patterns. The buzz around the “schemaless” and “non-relational” nature of NoSQL has promoted the illusion of a magical solution. But the reality is that it is harder to design an application with no structure, no schema, and no relationships. This is where Hackolade provides critical added value with its visual schema design and MongoDB schema generation capabilities.

Hackolade pioneered the field of data modeling for NoSQL databases when it developed a visual tool to perform the schema design of JSON structures. Written as a visual editor for JSON Schema, Hackolade is built from the ground-up to leverage the flexibility of JSON nested objects and polymorphism.

Hackolade is a MongoDB schema design software that dynamically generates scripts as you visually build a data model in forward-engineering approach. It also derives MongoDB schema based on the reverse-engineering of existing instances, so a data modeler or information architect can enrich the model with descriptions, properties, and constraints.

The visualization tool also generates HTML documentation of the database schema which serves as a platform for dialog between analysts, designers, architects, developers, and DBAs. The MongoDB Schema Design tool supports several use cases to help enterprises manage their databases 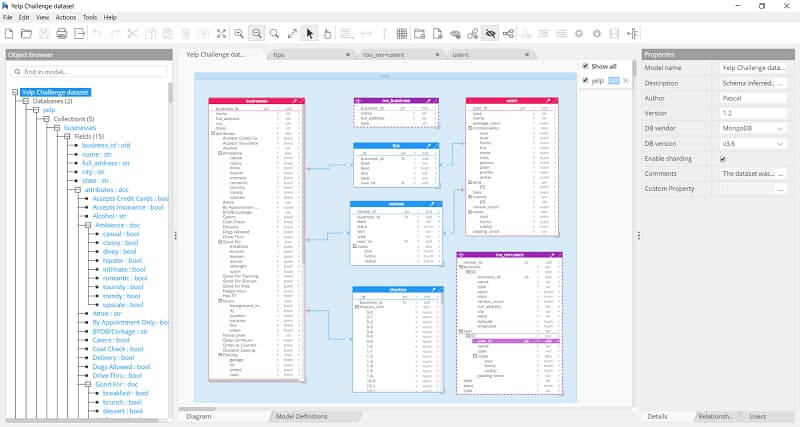 According to Alan Chhabra, VP of Worldwide Partners at MongoDB: "We’ve seen time and again how Hackolade can improve application quality and time to market for developers. It gives teams more control over their data by providing powerful data modeling, cataloging, and documentation capabilities." Hackolade is used by many additional references.

Components of a MongoDB Data Model

The simplest way to visualize a schema is to present it in an Entity-Relationship Diagram, a sort of blueprint of the foundations of an application, showing a map of the data. The future queries and data representation in the application screens are the main drivers for the design of a data model. An ER diagram displays JSON object nesting and illustrates the embedding and denormalization necessary for the scale and performance of the application. MongoDB is a non-relational NoSQL database technology, since relationships are not enforced by the database engine. However, data itself contains relationships, and an ER Diagram provides a visualization of these relationships.

A data model is described with definitions of properties and constraints for each collection and field. This can be supplemented with detailed descriptions and a log of team comments gathered as the model adapts over time for the schema evolution. 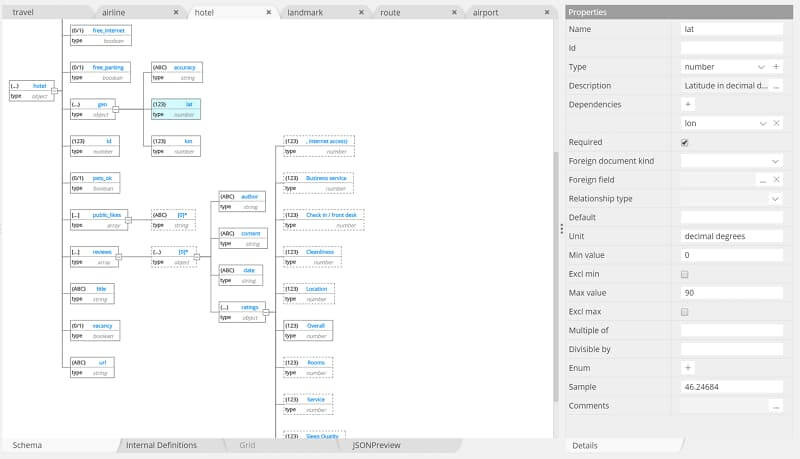 With complex application developed by large teams, it becomes a challenge to insure consistent ways to store data. To leverage the recent introduction of the validator with support for JSON Schema, the data model is the ideal place to store the business rules and constraints to limit inconsistencies and inaccuracies in the data, so this validator can enforce them thanks to a script generator. 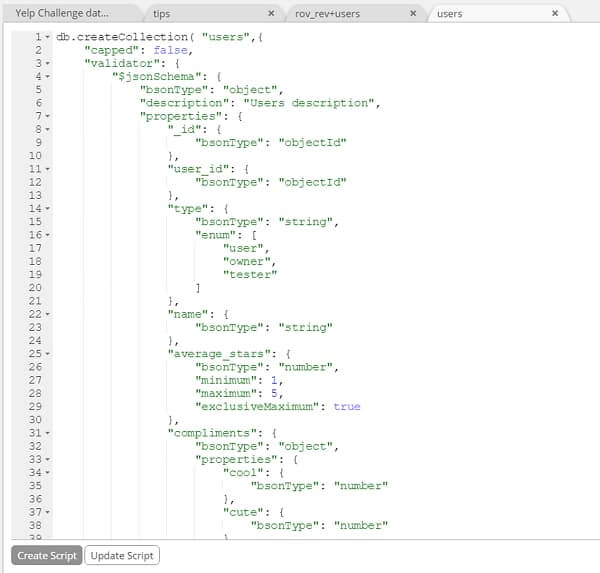 Outputs of a Data Modeling Tool for MongoDB

In addition to the script creation to facilitate development, the HTML documentation provides a rich, human-readable report that includes diagrams, collections, relationships and all their metadata. Many additional features have been developed to help data modelers.

Businesses make decisions based on information stored in databases. With data being a valuable corporate asset, data modeling becomes critical to understanding data, its interrelationships, and its rules. Hackolade increases data agility by making its structure transparent and facilitating its evolution. The benefits of data modeling for MongoDB are widespread and measurable.

To experience the first MongoDB data modeling tool and try Hackolade free for 14 days, download the latest version of Hackolade and install it on your desktop. There's no risk, no obligation, and no credit card required! The software runs on Windows, Mac, and Linux, plus it supports several other leading NoSQL databases.