Schema validation for a schemaless database: is it a contradiction?

MongoDB recently introduced, with its version 3.6, a validation capability using JSON Schema syntax. As we keep hearing that one of the great benefits of NoSQL is the absence of schema, isn’t this new feature an admission of the limitations of NoSQL databases? The answer is a resounding NO: schema validation actually brings the best of both worlds to NoSQL databases!

Previously with version 3.2, MongoDB had introduced a validation capability, using their Aggregation Framework syntax. This was in response to the request of enterprises wishing to leverage the benefits of NoSQL, without risk of losing control of their data. JSON Schema is the schema definition standard for JSON files, sort of the equivalent of XSD for XML files. So, it was only natural that MongoDB would adopt the JSON Schema standard. There are multiple reasons to leverage this capability:

In effect, the $jsonschema validator becomes the equivalent of a DDL (data definition language) for NoSQL databases, letting you apply just the right level of control to your database. 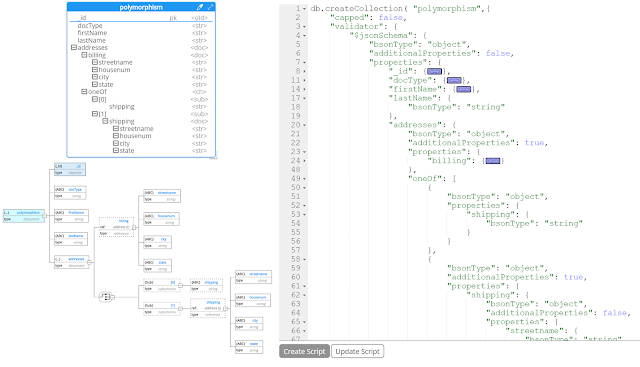 Since Hackolade was built from the ground up on JSON Schema, it has been quite easy to maintain MongoDB certification as a result of this v3.6 enhancement. No JSON Schema knowledge is required! You build your collection model with a few mouse clicks, and Hackolade dynamically generates the JSON Schema script for creation or update of the collection validator.